A couple of weeks ago, I went to a movie that energized me like few others. Pieces I Am is a documentary about the novelist Toni Morrison. I saw it again last night, and got even more from it.

I googled Toni after I got home and discovered that she is 88. Wow, I thought. That’s impressive. Then, last week, I got word that Toni had died.

I found it hard to feel sad. 88 is a long life. And Toni had done so much. She wrote many books. Since I read her novels in my early ‘20s, I’ve been inspired by her talent. Toni’s writing was evocative and she shared stories of the African-American experience that I hadn’t known before I read her work.

But the documentary filled in the picture of her life. Toni was an editor at Random House. There, she focused on publishing the work of other African-American women writers like Angela Davis and Toni Cade Bambara. She worked full-time, wrote novels and raised two sons as a single mother.

Through her talent and determination to write her stories, she earned a Pulitzer Prize. And, she was the first African-American woman to receive the Nobel Prize. What an amazing life and career! Rather than feel sadness that she is gone from the earth, I celebrate and am grateful for how she lived and what she did for American literature and for African-American people.

It might be easy to see this legend and think, oh, I could never do anything like that. And, for the most part, it’s probably true that neither you or I will get the Nobel Prize. (But you never know!!) 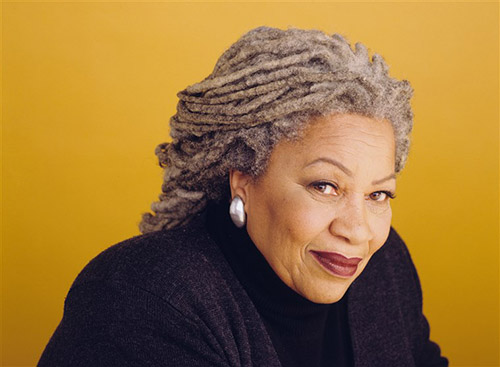 I want to underline four things I gleaned from Toni’s life for us:

Toni had an unshakable passion for writing and confidence in herself and her stories. Facing criticism that she didn’t include white people in her stories, she stood her ground. She wrote about and for African-American people. Her stories that did not center on or include the white gaze. This was groundbreaking and lit the way for other authors to stand in the truth of their vision. I am taking this inspiration now in the project I am writing. What stories must you tell that others might criticize you for? How will you set aside perceived pushback to write your truth?

Toni knew and trusted herself. At the time, she was one of the few women in the publishing world and certainly one of the few African-American women. But when faced with a room of white male colleagues, she didn’t waver. “I knew I was more interesting than them.” She didn’t try to be like them. She owned herself and her place at the table. Now more than ever we are called to stake our place in the conversation. To not back down, to not water it down and to not abandon ourselves. How can you trust your unique gifts and bring them to the conversation?

Toni asserted her authority. As an editor of Muhammod Ali’s book, she was responsible for helping him on his book tour. But he couldn’t really see her. She realized that he had her in his mind as a woman, and that he didn’t regard women as having any authority. When this became apparent to her, she shifted. She moved into ‘mother mode’, dominating him in a way he could understand and accept. Sometimes we have to exert our authority in new ways, but without abandoning ourselves. How can you claim your authority today?

Toni ‘went there’. Her books are so enduring because Toni addressed taboo subjects. She staked a claim for the African-American experience, and didn’t shy away from the bloody parts. Beloved, a novel about a slave mother who kills her children rather than see them return to slavery, shows the deep and absolute desperation of a mother who sees no way out for her children. While many would call a mother like that a monster, Toni saw her humanity. She strikes to the heart of the slave experience in ways that no one else had. Where do you need to take your writing to reflect a deep honesty that may not be expressed otherwise?

I could go on and on. Toni’s life and body of work is a true gift to the American people – to all of us. After I saw Pieces of Me, I felt so energized. I believe everyone should see this movie. Don’t doubt me on this one, friends. Just find it if you can and go see it.

It’s a fun game for budding authors to go to the bookstore to see where their books will go on the shelves. It’s a deep honor for me that my books nestle alongside Toni Morrison’s books. I don’t have any illusion that my talent matches hers even remotely. But I know that we share space in the pantheon of novels. That we have both taken the risks to write about what means most to us.

What has Toni Morrison inspired in you? What creative risks are you willing to take now? Share your thoughts below.

By submitting your email address, you consent to receive emails from Cynthia Morris at Original Impulse. You may unsubscribe at any time.

"Being coached by Cynthia highlighted my unrevealed gifts. Our time together has revolutionized the way I work and lead my companies.

I would have never imagined that this powerhouse of a creative would help me grow, connect to my heart and improve my companies in so many areas. Cynthia’s coaching is like supercharging a normal engine; there is no comparison."

"For years, I struggled with this belief that I wasn't good enough, that I wasn't a real writer, that I wouldn't be able to follow through. Your coaching and support opened something in me that had gone dormant.

With your words in my ears and my heart finding new excitement, I pushed the words across the page. My first novel is complete. You, dear Cynthia, helped me lay the dominoes. I can’t thank you enough for the motivation, the inspiration, and the reminder that I was meant to write."

"Cynthia has given me my writing voice. I can now say I am a writer. My newsletter readers tell me how much they love receiving it!

Cynthia has a great spark of life that just shines out. She engages in a way that encourages you to challenge yourself as a writer and is there to help pull you out if you get stuck or lost."

"Cynthia helped me drive a short story across the finish line. I recommend Cynthia if you want to learn about your own writing process in an experiential way and get practice on things like letting go of perfectionism for a greater goal."

"Cynthia helped me so much to develop a writing practice. I love her approach to combining creativity and action. It's gentle and effective and highly self compassionate."

"Because of my work with Cynthia, I have been able to embrace my artist's path and choose a lifestyle that truly speaks to my soul. Instead of trying to be and do everything, I now follow my true desires with courage, joy and serenity.

Cynthia is intuitive, down-to-earth, straightforward and honest. She can read between the lines, and she never lets me run away, give in and give up. Cynthia is a fabulous mentor and an amazing artist."